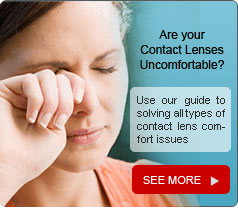 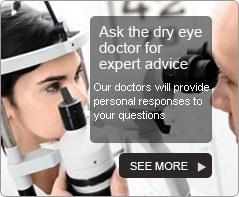 A chalazion, otherwise known as a meibomian cyst, is a fairly common condition that occurs in the either the upper or the lower eyelid. It is caused by a blockage of the duct of the meibomian gland of which there are approximately 26 on the upper lid and 24 in the lower lid. These glands normally produce oil that is deposited on the edge of the eye lid which is blinked over the front of the eye and prevents evaporation of the tears. When the duct becomes blocked the small gland continues to produce oil which accumulates and causes swelling of the gland and the cyst becomes obvious (Fig 1). 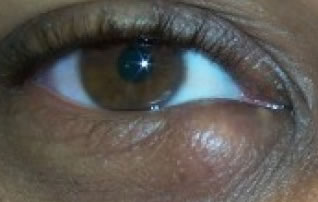 In many cases the oil changes to a gel and can become infected, red and inflamed (Fig 2).

Occasionally this infected gland becomes an abscess (Fig. 3) and immediate treatment is indicated. 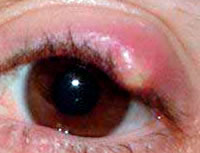 Predisposing factors for the formation of chalazions are meibomian gland dysfunction (or ‘meibomitis’) and the skin condition ‘rosacea’. You can read more on these condition under the ‘Blepharitis’ download.
Treatment of Chalazions (Meibomian Cysts) The treatment depends on the extent of the condition. If the cyst is ‘cold’ (Fig. 4), that is if there is a swelling with little or no redness and the lesion has been there for some time (weeks to months), then the treatment is surgery.

A local anaesthetic injection is administered into the skin around the area of the cyst and after some minutes the lid is clamped, everted and an incision is made into the tarsal surface (under surface) of the eyelid (Fig. 5). 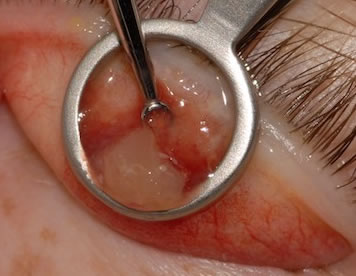 The contents of the cyst are curetted (‘scooped out’) using a tiny spoon shaped instrument called a curette. The procedure is known as ‘Incision and Curettage’. If there is adequate anaesthesia it is a painless procedure except for slight discomfort when the eyelid is everted, especially the upper eyelid. If the cyst is red and sore, and this can occasionally be surrounded by swollen red skin (cellulitis) (Fig. 6), then the initial treatment is conservative medical treatment. 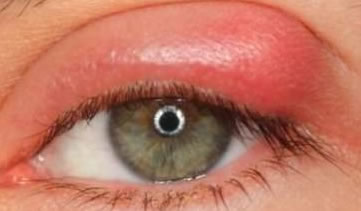 This will include antibiotic drops and ointment and if the cellulitis is significant your doctor may also decide to prescribe a course of oral antibiotics. This treatment should be accompanied by the application hot poultices three to four times a day. To prepare a hot poultice you need some suitable soft material for example padded gauze squares which can be purchased in your local pharmacy. Pour boiling water from the kettle into a desert bowl and allow to cool for a short while. When it is just cool enough for you to handle without burning yourself then soak one or two of the pads in the hot water. Squeeze out the pad and try holding it against the skin on the back of your hand. When you can just about bear that then close your eye and apply the hot poultice to the closed eyelids. Do this for very short periods initially and extend the length of time you apply the poultice. After a few minutes replenish the hot poultice by dipping it back into the bowl of water and repeat the whole process a few times. 20 minutes is ample time to spend on this process at a time and you should do it 3-4 times a day for 2-3 days. ‘Hot spoon bathing’ is another method of applying a hot poultice. Wrap a gauze bandage three times around a metal desert spoon cutting the bandage with a scissors. Dip the spoon into the hot water and allow the spoon soak in the heat for a half minute. Squeeze the water out of the bandage with your other hand. Gingerly apply the back of the spoon to your closed eyelids by the method described above. The metal spoon tends to hold the heat a little longer than the gauze squares. You have to be extra careful if you are applying hot poultices to another person.

If an abscess has already formed (Fig. 3) then immediate incision is usually indicated. You can recognise an abscess by seeing yellow pus at the point of the infected cyst at the front of the eyelid. Sometimes the abscess will point on the posterior (palpebral) lid surface and you won’t be able to see it pointing. Suspect the presence of an abscess if the condition is very painful, with deep redness of the skin around the lesion with a generally swollen eyelid (cellulitis) (Fig. 7).

This condition needs to be treated urgently and oral antibiotics are indicated.

This a ‘cold’ painless cyst that normally does not become infected (Fig. 8).

It is a skin cyst and can occur along the edge of the eyelids or in the peri-ocular areas. It is characterised by a white/yellowish appearance and is firm to the touch. It becomes noticeable first as a very small cyst that often rapidly becomes bigger in a matter of weeks to months. It is quite benign and most people want to have it removed because of its appearance especially when it is obvious to others. This cyst is similar to a chalazion in that the gland that becomes blocked is an oil gland of the skin. However it doesn’t cause as much trouble as a chalazion and is easier for the ophthalmologist to treat surgically. If the cyst is big then a local anaesthetic injection is required before surgery. However small cysts do not require an anaesthetic in adults who are prepared to stay steady while the cyst is being removed. Removal of a small cyst is less painful than the local anaesthetic injection and adults who realise this usually are happy for the surgeon to proceed without the use of an anaesthetic injection. Following surgery the wound heals up within five days and an antibiotic ointment is applied a few times a day during this period.

Cysts of Moll do not occur as frequently as chalazions or sebaceous cysts. This cyst is an ‘aqueous’ retention cyst (Fig 9) which is due to blockage of modified sweat glands that occur around the lid margin.

Cysts of Moll look like little bubbles of fluid. Treatment is usually surgical.

These cyst appear as clear vesicles (little bubbles) on the white part of your eye (Fig. 10) or sometimes on the inside surface of your lower eyelid.

The cyst is generally caused by the blockage of mucin, which is a clear substance used in the production of tears. The treatment of these cysts is initially conservative, as they sometimes disappear of their own accord. This can be augmented by drop treatment by your doctor. The drops prescribed sometimes include steroids. If this does not settle the cyst then incision and drainage by an ophthalmologist is required. Eventual excision (cutting away the cyst) may be indicated in recurring cases.

Sometimes you will notice very small yellow spots on your tarsal conjunctiva when you pull your lower eyelid down. These are known as ‘concretions’. Concretions are small hard nodules that occur in the conjunctival layer of the inside of your eyelids akin to ‘calcium stones’. Sometimes they come to the surface and irritate the eye causing redness and soreness. If this happens under the upper lid (Fig. 11) it can be particularly irritating and the cornea can become scraped with each blink.

Treatment is easy for the ophthalmologist who will remove them with a sharp sterile needle using anaesthetic eye drops so you won’t be uncomfortable. If upper lid concretions need to be removed than the upper lid needs to be everted (turned upwards) which is not very uncomfortable.

There are several other cysts that occur around the region of the eyes but are quite rare. If you are not sure of the diagnosis you should attend your general practitioner (G.P.) or an ophthalmologist (eye doctor).

Any cookies that may not be particularly necessary for the website to function and is used specifically to collect user personal data via analytics, ads, other embedded contents are termed as non-necessary cookies. It is mandatory to procure user consent prior to running these cookies on your website.